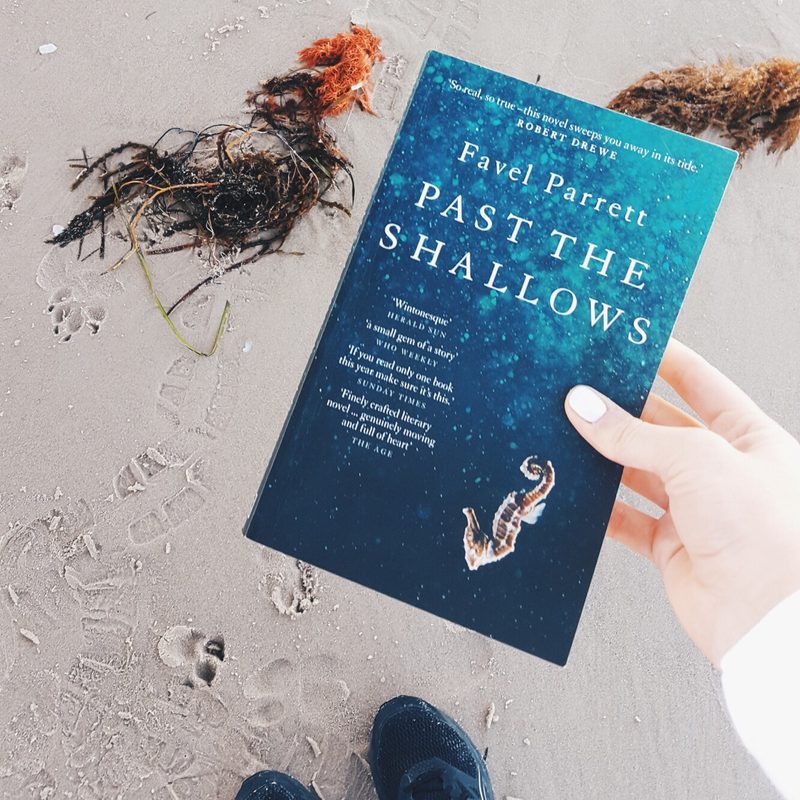 Past the Shallows is a hauntingly beautiful story of the bond of brotherhood and the fragility of youth. Told with an elegant simplicity, this is the story of two brothers growing up in a fractured family on the wild Tasmanian coast. The consequences of their parents' choices shape their lives and ultimately bring tragedy to them all.
Harry and Miles live with their father, an abalone fisherman, on the south-east coast of Tasmania. With their mum dead, they are left to look after themselves. When Miles isn't helping out on the boat they explore the coast and Miles and his older brother, Joe, love to surf. Harry is afraid of the water.
Everyday their dad battles the unpredictable ocean to make a living. He is a hard man, a bitter drinker who harbours a devastating secret that is destroying him. Unlike Joe, Harry and Miles are too young to leave home and so are forced to live under the dark cloud of their father's mood, trying to stay as invisible as possible whenever he is home. Harry, the youngest, is the most vulnerable and it seems he bears the brunt of his father's anger.
"If you read only one book this year, make sure it's this".
The Sunday Times
"This book is that rare thing, a finely crafted literary novel that is genuinely moving and full of heart".
The Age


Publishers Weekly Review of Past the Shallows

Australian newcomer Parrett’s remarkable debut examines the bleak life of a broken family in Tasmania, in spare, unflinching prose. Traumatized by their mother’s tragic and early death, three brothers struggle as their father tries to eke out a living from the sea. The focus is on Harry, the youngest brother, a guileless boy of seven who fears the water but loves to collect the flotsam and jetsam on the beach. Miles, the middle son, is envious of his older brother Joe’s independence and burdened by his difficult father’s need for help fishing, as well as by the responsibility of taking care of Harry. But even during the dark times when the father and his business partner are abusive to the boys, there are bright moments: Harry finds solace in a dog belonging to a strange but kind local outcast. Miles finds release in the exhilaration of surfboarding. And despite the desolate surroundings and depressing circumstances, a better life is within reach for these boys.

FAVEL PARRETT Past the Shallows. Reviewed by Linda Funnell

This debut is a sharp plunge into dark water.

Bad things happen in Tasmania: from Marcus Clarke to Richard Flanagan and Carmel Bird, our novelists have been delivering stories inspired by the island’s ancient forests, wild seas and brutal history.
Favel Parrett is not a native but, in an interview last year, said she had lived in Hobart for seven years as a child.

And it is through the eyes of two children, 10-year-old Harry and 14-year-old Miles, that we are drawn into this tale of family tragedy set on a lonely stretch of Tasmania’s south-east coast.
Harry, Miles and older brother Joe lost their mother in a car accident one night several years ago.  Their father, who struggles to make a living diving for abalone, is violently unhappy.  The dangers of his trade, and his casual viciousness towards his children, are chillingly shown. Miles is forced to work on his father’s boat during school holidays, and when a key crew member is injured, it seems Miles’s schooling will be sacrificed for the family business.
Perrett deftly sketches the small community: 19-year-old Joe, who hasn’t lived at home since he was 13; the ineffectual Aunty Jean, struggling with her own grief; Harry’s friend Stuart and his mum, who live in a caravan; and George, a hermit whose terrible scars frighten the local children.
Too small – and too prone to seasickness – to go out on the boat with Miles and his father, Harry is left on his own during the day, and forges an unlikely friendship with George and his dog. But young as he is, Harry knows instinctively that this is not something to be shared with his father.
The family’s isolation, and the claustrophobia of the brothers’ situation, pulse through the novel.  Joe has built his boat, ready to sail to freedom, but what can Miles and Harry do? The tenderness between the two younger brothers is rendered through small, everyday details:  Harry preparing ‘the best cup of Milo ever’ one evening for an exhausted Miles; Miles hiding a shark egg at the beach for Harry to find.

One of the pleasures of the novel is its depiction of the natural world.  This is a writer who knows the sea – its moods, its pleasures, and its danger.  Here is Miles surfing:
The cold water bit at his hands and feet as he began the paddle.  Winter brought massive swells, awesome to watch and not much fun to be in, but today the bluff was still like liquid mercury.  Near perfect three-foot lines.  The paddle was easy.  The waves were easy.  The ocean was at peace … Miles turned his head to the horizon and grinned.  A good-sized line, maybe a four-footer, hit the reef and began to peel.  Sometimes you didn’t have to move an inch.  The shoulder of the wave lifted his board; he looked down the clean face and took the drop.  Miles felt his bones.  He carved along the wave nice and loose, flicked up with sharp cutbacks every so often to bring him back up onto the shoulder.  He heard Joe hooting from the beach and he knew he was charging.
But the ocean has other moods, too:
There was something coming.  Miles had felt it in the water.  Seen it.  Swell coming in steady, the wind right on it, pushing.  It was ground swell.  Brand new and full of punch – days away from its peak … It had even made Miles queasy, the way the boat rocked.  The way the water rolled up under it.  And he never got sick.
This is a beautifully written book.  The spare prose carries the story like a swiftly moving current, but makes space for small moments of connection, too – Miles discovering Aunty Jean’s hoard of unused baby clothes; Harry buying a tin of tea for George.  The climax, when it comes, is as breathtaking as it is inevitable.  This is a heartbreaker of a novel, and bodes well for this young writer’s future.

Favel Parrett is one of a new generation of Australian writers, and she has made an impressive debut with her first novel, Past the Shallows. It is raw, tough and uncompromising, and hard to put down: I read it in a single sitting.
If you travel much around the Australian coastline, sooner or later you will find a fishing fleet. These days the boats are huge and even from the pier you can see that they have a great deal of sophisticated equipment: radar and sonar, tall radio masts, and all the stuff needed for crews to process the catch quickly and efficiently and keep it on ice till it’s brought back to shore for the market.  But none of this fancy gear can alter the fact that the Aussie coastline is rugged and dangerous, that the weather is capricious and often hostile, and that commercial fishermen are under constant pressure to bring back a catch big enough to make a profit.  Often they go out in weather that would make an experienced sailor hesitate.  It’s a hard, tough life for these professional crews, and harder still for any small operator competing against them in a boat owned by the bank.
Favel Parrett has used this scenario for a pitiless tale.  There are three brothers growing up under the volatile moods of their father Steven Curren. Joe, at nineteen is the oldest, and on the verge of abandoning the family: Miles is still at school but old enough to go out on the Lady Ida during the holidays, and Harry is the baby of the family, an afterthought.
The plotting of this novel is taut and effective with a climax that makes turning out the bedside light an impossibility, but it’s the characterisation that will stay with me.  The third person narration gives us only two perspectives – Harry’s and Miles’ – and each of these bring this sad family and its secrets to life.  Harry is too young to remember much of his dead mother – he knows only the privation that a neglected child endures.  He is often hungry, craving sweet things but hoarding them too because he knows their rarity.  He is lonely, in the way, underfoot and often a burden for Miles because there is no one else to look out for him.  Aunty Jean takes him to the Hobart Regatta but doing her best for these motherless boys isn’t much of a best; she isn’t well, she hasn’t much money, and she has her own burdens of grief which blind her to the emotions of a child.
Harry finds solace in small friendships.  There is a school friend, Stuart, with a kindly mother who dares not interfere; there is a grotesquely disfigured neighbour whose dog offers the comfort of touch; and there is Miles to hero-worship. But he cannot expect much from any of the people in his life: he has had to learn to make himself unobtrusive and to mould himself to suit the expectations of others:
The air was cold and the house was quiet.  Harry got out of bed and shoved his bare feet into his sneakers.  Out in the kitchen, if he stood right on the tips of his sneakers, he could just reach the peanut butter jar in the top cupboard.  He ran his finger around the inside of the almost empty jar.  There was only enough peanut butter for one slice, so he put two pieces of bread in the toaster and made a toast sandwich.
Even though the embers were dead, Harry sat down by the wood heater to eat.  He ate quickly.  Aunty Jean would be here soon to take him to the Regatta and he’d better get dressed properly.  He’d better find the scarf she’d made him and wear it.  He’d better find the navy blue parka she’d bought him for Christmas.  He didn’t really like the parka because it was too big and he didn’t like the colour, but it was warm.  Anyway, he didn’t have another coat.  Only a thin rain jacket. (p11-12)
Miles is burdened by half-remembered memories and by his fraught relationship with his harsh, uncompromising father.  He hates going out on the boat and although he loves to surf, he fears the sea and its moods as much as he fears his father.  He has learned the hard way to fear his father’s fishing partner, Jeff, as well.  There are no safe havens for these boys on land or sea.  Miles longs to be a craftsman in wood as his Grandfather had been but he knows this isn’t an option.
It is a melancholy novel, but as Robert Drewe says on the cover blurb, it seems real and true, and it ‘sweeps you away in its tide’.  Parrett has resisted the temptation to conclude with a banal resolution – and it is left to the reader to imagine how these people brought so vividly to life will come to terms with the final tragedy.